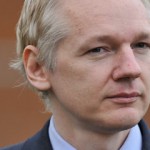 Swiss whistle-blower Rudolf Elmer — the former chief operating officer of the Cayman Islands subsidiary for Swiss bank Julius Baer — handed the discs to WikiLeaks founder Julian Assange at a press conference in London. The data relate to offshore bank accounts allegedly held by individuals and companies from across the world, including the U.S., U.K. and Germany, and covers 1990 to 2009.
Assange said the secret banking records could be published in “a matter of weeks” if they can be processed quickly enough. He added that he might seek the help of financial media outlets, or a nongovernmental organization such as the Tax Justice Network, to help analyze the information.

The WikiLeaks boss is currently on bail in the U.K. and battling an extradition request by Sweden, where he is wanted for alleged sexual misconduct with two women. He has denied all of the accusations and refused to talk about his case at today’s press conference.
Elmer, who is due to stand trial Wednesday in Zurich on charges of breaking Switzerland’s strict banking secrecy laws, told reporters he felt a moral obligation to make the files public.

“I do think as a banker I have the right to stand up if something is wrong,” he said. “I am against the system. I know how the system works, and I know the day-to-day business. From that point of view, I wanted to let society know what I know. It is damaging our society.”
The former banker is an experienced whistle-blower. Elmer worked at Julius Baer for a decade, but says he lost his job in December 2002 after raising concerns that the bank was helping some clients engage in criminal tax evasion.

“After having tried in-house to resolve the issue,” Elmer told the press conference, “I was fired.”

He spent the next three years attempting to persuade U.S. and Swiss authorities to intervene, and in 2005 he was sentenced to 30 days in a jail for violating Swiss banking secrecy.

“Afterward I was offered money to withdraw my complaints,” he said. “I refused. My conscience would not allow it.”

In 2008, he contacted WikiLeaks and supplied the site with hundreds of documents allegedly revealing money laundering and tax evasion by several Julius Baer clients.
The Swiss bank has denied any wrongdoing, stating that Elmer’s accusations were “baseless” and that he “falsified documents” to support his allegations and “made death threats against employees.”

Many of the files contained on the two new CDs allegedly were passed to Elmer by whistle-blowers working at three financial organizations, including Julius Baer. The documents include the names of 40 prominent politicians, businesspeople and “people who have made their living in the arts,” Elmer said.

Asked if the files contained evidence of criminal activity or merely detailed legal deposits made offshore, he replied, “It’s not up to me to make any decision on allegations. I think suspicion is enough.”