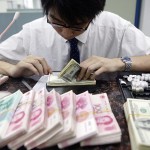 Monday’s large aftershock came exactly a month after an earthquake and tsunami flattened towns and damaged a nuclear plant in northern Japan. It’s the second strong aftershock to hit northern Japan in less than a week.

The dollar was worth 84.75 Japanese yen in late afternoon trading in New York, down from 84.89 Japanese yen late Friday.

The Japanese yen is considered a safe-haven currency and tends to get stronger during times of turmoil. Days after the March 11 earthquake and tsunami, the yen reached a new record high against the dollar.

Elsewhere, the U.S. dollar traded between narrow ranges and was nearly unchanged Monday. The euro edged down to $1.4429 late Monday from $1.4435 late Friday.

Weighing on the dollar was the assumption that the Federal Reserve will keep interest rates “anchored” at zero, said Win Thin, senior currency strategist at Brown Brothers Harriman. Last week, the European Central Bank raised its key interest rate to 1.25 percent from 1 percent.

Janet Yellen, the vice chair at the Federal Reserve, said in a speech Monday that the economy is still not strong enough to start changing the central bank’s current policy.

“An accommodative monetary policy continues to be appropriate because unemployment remains elevated, and, even now, measures of underlying inflation are somewhat below the levels that FOMC (Federal Open Market Committee) participants judge to be consistent,” said Yellen.

Central banks raise interest rates to curb inflation, and higher rates tend to increase demand for the currency linked to that country or region.

← Home Prices Near a Double Dip!
The Basics of Oil Trading →