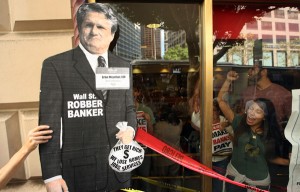 It began on Sept. 17 with a few hundred people gathering in lower Manhattan. The protest — against banks, moneyed influence in Washington, corporate power, and a host of other loose causes — rated only sparse mention at first, even in the local press. Their targets saw them as goofy.

No more. Police this week rousted protesters from their Zuccotti Park encampment in a maneuver planned with military precision. Today the Occupiers — this time, by the thousands — were back on the march, swarming the streets around the New York Stock Exchange, clashing with police, and enraging stock exchange employees.

So at two months, what are Occupy Wall Street’s wins and losses?

—Bank fees: Every time you use your Bank of America debit card and don’t pay $5, thank Occupy Wall Street. The decision by big banks earlier this month to roll back their debit-card fees marks the first successful popular uprising by consumers against fees. And, considering the banks’ years-long success in loading them up, that’s no small achievement. Yes, much of the pressure came from the Bank Transfer Day effort, led by Kristen Christian, a Los Angeles art gallery owner who isn’t a direct supporter of OWS (that’s her logo to the right). But the debit fees never would have been rolled back — and 40,000 people wouldn’t have transfered accounts to credit unions — without the accelerant provided by OWS.

—Changing the national conversation: Coming out of the summer, the economic debate in Washington was dominated by talk of cutting the deficit — not jobs, not the wealth disparity in America, and certainly not the role of money in politics. Today that has shifted. Part of my job here each morning is to aggregate stories about the wealth debate; the volume of candidates is impressive. You can see the change in a Google Trends chart of web searches and news references for the term “income inequality.” An analysis of the #OWS Twitter hashtag (thanks to my colleague Dan Fletcher) shows a rise over the past month, spiking ahead of the Zuccotti police action.

There’s been a more subtle shift. Note the number of times that Occupy Wall Street is used as a reference point in analyses of issues ranging from mortgage relief to student loans to taxation. It has lent urgency and weight to what may have seemed like dry policy discussions. In Washington, the GOP in general remains dismissive of the protests. Some on the right support the criticism of corporate bailouts, though they see the protesters as misguided. President Obama first mentioned (as best I can tell) OWS on Oct. 6, going to great lengths to frame the movement around his own policy proposals. His press secretary has taken questions on the movement at nearly every press conference since then.

—Getting Wall Street’s attention: Perhaps even more impressive is how OWS has seeped into Wall Street’s own conversation. This is partly due to the early attention paid by a few influential financial bloggers, such as bank critic Barry Ritholtz. But bankers were clearly stung by the 1% tag and angered by suggestions they hadn’t earned their bonuses. An Oct. 11 march to the Upper East Side Manhattan homes of JPMorgan CEO Jamie Dimon and hedge fund chief John Paulson got moguls’ attention. OWS even began popping up as a “risk factor” in several corporate financial filings with the Securities and Exchange Commission and in analyst briefings. As Footnoted.org pointed out, in the financial world this is as good an indication as any that a movement has “truly arrived.”

—Public perception: The increasing seediness of the “permanent” OWS encampments — and a handful of highly publicized acts of violence in or near the camps — provided a basis for the police crackdowns in Oakland, Portland, and New York. It wasn’t just the New York Post and its energetic efforts to link OWS to street crime everywhere. Small businesses around Zuccotti Park may have grumbled at first about protesters filling their bathrooms and police blocking foot traffic, but many supported the right to demonstrate. By the end, some businesses were planning their own protest against the city’s failure to clear the camp.

If the movement becomes centered more around symbolic marches and other protest actions, a bigger concern may become the potential for violence — by protesters or police — and how that comes to be perceived. In Oakland, the Occupiers’ successful march to shut down the city’s huge cargo port was marred by the subsequent window smashing and other acts of property violence by a small number of protesters. Organizers have stressed non-violence. Whether they can keep a lid on their angriest protesters may well determine the movement’s staying power.

—Zuccotti Park: How important is it to have a home base — or, as my colleague Mark Gimein puts it, a stage from which to perform? When the city cleared away the tents at Zuccotti Park, it may have done the movement a favor, giving its first act a dramatic (non-violent) climax and freeing it to move on to more focused actions. Or it may mark the point where the media loses interest.

The bottom line: Those “occupy” web searches may have peaked, and the public may prove to have little stomach for street clashes. But it’s hard to see the big issues raised by the Occupiers fading anytime soon. Especially as the real street theater — the 2012 presidential race — wheels