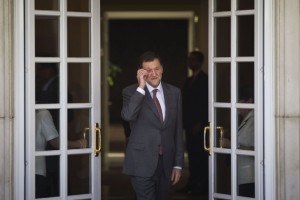 MADRID (AP) — Spain could ask for a rescue of its struggling banks this weekend when European finance ministers hold an emergency conference call Saturday to discuss the country’s financial problems, a move that would make it the fourth member of the 17-nation eurozone to seek outside help since the continent’s financial crisis erupted two years ago.

The ministers will discuss a potential rescue package for Spain as pressure mounted on the country to prop up the banks hurt by toxic assets after a property boom went bust.

A report from the International Monetary Fund released estimated Spanish banks need a recapitalization injection of at least €40 billion ($50 billion) following a stress test it performed on the country’s financial sector. That report came out early Saturday, three days ahead of schedule, underscoring the urgency of the situation.

Spain as of early Saturday afternoon had not asked for help, “but we want to prepare if the call comes,” said Guy Schuller, a spokesman for Luxembourg Prime Minister Jean-Claude Juncker, who chairs the meetings of eurozone finance ministers. Spanish officials neither confirmed nor denied a request for a bailout was imminent

A phone call among senior officials Saturday morning meant to prepare the finance ministers’ call ended without a formal request from Spain, an EU official said. He spoke on condition of anonymity because he was not authorized to release the information.

Spain’s Development Minister, Ana Pastor, did not tell reporters Saturday whether the country would ask for a bailout but said: “What we’re working on at the moment is the recapitalization of the financial entities that need it, nothing else.”

Spain initially tried to get European leaders to directly fund aid to the banks so the government wouldn’t have to ask for it and suffer the stigma of being lumped together with Greece, Ireland and Portugal as nations forced to ask for outside help.

But Germany, Europe’s paymaster, dashed that idea. So Spain is trying for a “light” form of a bailout only for its banks under a measure approved by Europe last July. That allows the European Union to lend money for the purpose of recapitalizing banks in countries not already receiving bailouts.

The rules say the money has to be funneled through the government. But conditions attached to the bailout would not have to be as over-arching as those attached to bailouts of government finances.

“The Spanish government has to do what is necessary to support, strengthen and stabilize our financial system,” said Maria Dolores Cospedal, leader of Prime Minister Mariano Rajoy’s Popular Party.

News of the call came just one day after Spanish Deputy Prime Minister Soraya Saenz de Santamaria said the government would wait for the results of three reports, including the IMF one and two from independent auditors due no later than June 21, before acting. But pressure was mounting on Spain to take action.

In an interview published Saturday, the head of Germany’s central bank, Jens Weidmann, called on Spain to tap Europe’s bailout fund, the EFSF, to prop up its banks.

“If Spain is overwhelmed by the financing need, it should use the instruments created for that case,” he was quoted as telling Germany’s Welt am Sonntag paper. “The motto cannot be to avoid using the rescue fund at all costs.”

Juncker has also said the situation is coming to a head.

“The solution will have to be found quickly,” he told German public radio station Deutschlandradio.

Spain was hit Thursday with a downgrade of its credit rating to just two notches above junk by credit rating agency Fitch, which estimated Spanish banks may need as much as €100 billion ($124.7 billion). Then on Friday, Moody’s Investor Services warned it could downgrade Spain and other countries in the eurozone.

Moody’s said Spain’s banking problem is largely confined to that country and not likely to spill over to other eurozone nations, with the exception of Italy — where the European Central Bank has already stepped in to buy government bonds as a way to help lower the country’s borrowing costs.

Spain has been criticized for being too slow to set out a roadmap to resolve its problem. European business leaders and analysts have stressed that Spain must find a solution quickly so that it is not caught up in any market turmoil sparked by the Greek elections on June 17. There are concerns that anti-bailout left-wing party Syriza could become the largest party in the Greek parliament, putting the country’s membership in the eurozone at risk.

But others said it’s more important for Spain to correctly assess how to shore up its banking system than it is to hurry into a bailout ahead of the Greek elections. The audits that Spain’s government is waiting for are crucial to determining precisely how much capital the nation’s troubled banks need, said Mark Miller, an analyst with Capital Economics in London.

“Any notion of rushing, that would be very unwise, in fact I think it could make things much worse,” he said. “I think it’s important to get it right rather than simply say that there is a rather appealing idea of a one-week window of opportunity, relative to getting a solution ahead of Greek elections.”

If Spain doesn’t get a request for outside help right the first time, “then you are in second bailout territory,” Miller said.

Working in Spain’s favor is the fact that its public debt is actually quite low, at 68.5 percent of its gross domestic product at the end of 2011.

Its debt is predicted to hit 78 percent by the end of the year, but even that figure would be below the debt-to-GDP ratios of Europe’s strongest economy, Germany.

But Spain’s economy is in terrible condition. It is in its second recession in three years, unemployment is nearly 25 percent and there is little hope for improvement this year. Rajoy’s government has imposed a wave of austerity measures since he took office in December that have raised taxes, made it cheaper to hire and fire workers and cut government funding for education and health care.

Investor doubts about a country’s ability to maintain its debts can lead to higher borrowing costs, which in turn undermine the government’s ability to finance itself. Greece, Ireland and Portugal have all fallen victim to such market doubts and were forced to take bailouts.

A Spanish bank bailout could also turn market focus to Italy, which has the second-highest debt load in the eurozone after Greece at some 120 percent of gross domestic product. Italy’s budget is in better shape but its growth prospects have sagged and the willingness of Italian politicians to tackle the country’s long-standing problems with choking bureaucracy, taxes and regulation remains in doubt.

Associated Press writers Juergen Baetz in Berlin, Sarah DiLorenzo in Paris and Slobodan Lekic in Brussels contributed to this report.