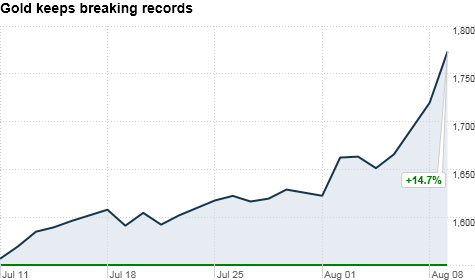 The current flight to gold has been by a nasty stock market plunge. On Monday, the Dow Jones industrial average plummeted 624 points, or about 5.5%, and the Nasdaq and S&P 500 dropped nearly 7%. It was the worst day on Wall Street since the 2008 fiscal crisis.

The rise in gold and the plunge in stocks are the result of Standard & Poor’s downgrade of U.S. debt on Friday from AAA to AA+. This has undermined faith in the United States and the contagion has spread to markets around the globe.

“Against this backdrop, together with strong Asian gold demand and continued purchasing by central banks, gold continues to demonstrate its attributes as a hedge against credit risk, currency and inflation/deflation risk,” wrote Marcus Grubb, managing director of investment at the World Gold Council, in an e-mail to CNNMoney.

Jono Remington-Hobbs, precious metals analyst for Fastmarkets Limited in London, said that gold has been on a 10-year boom. It has recently become more valuable as other safe havens, such as the Swiss franc and Japanese yen, lost their luster.

But oil rebounded Tuesday after tumbling below the $80-a-barrel mark, rising 26 cents to $81.57 a barrel. Just two weeks ago, oil was flirting with $100 per barrel.

← Investors lose a trillion dollars in one day
$2.8 trillion lost in market turmoil so far →