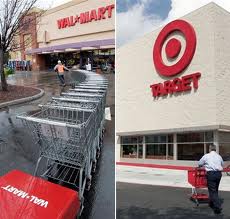 Target Corp. (NYSE: TGT) the second-largest U.S. discount retailer, may have found a strategy to oust Wal-Mart Stores Inc. (NYSE: WMT) as the No. 1 discount-shopping source.

For years retailers have tried to get an edge on Wal-Mart, and through added business segments, new discounts and a streamlined store focus, Target may have done just that.

Even with a tough outlook for U.S. retail spending, the company is expected to do well for the rest of the year.

Burt Flickinger, managing director of Strategic Resource Group, said Target’s been delivering all the right moves a retail company should make when the economy falters.

“Target’s strategic plan is much stronger than Wal-Mart,” Flickinger said. “Wal-Mart is going the wrong way.”

It also opened a grocery section in most stores to become more of a one-stop shopping experience, like many Wal-Mart locations. The grocery business boosted profitability and only slimmed margins to 31.6% from 32%.

Target’s focus on consumable items is part of a strategy to generate more same-store sales in a few geographic regions, compared to geographically diversified Wal-Mart. The business shift has paid off.

“Target’s merchandise initiatives and all the other things they are doing to improve the assortment are continuing to win despite Wal-Mart showing some signs of life in its U.S. business,” Brian Sozzi, an analyst for Wall Street Strategies Inc. in New York, said in an interview.

Target also sees a lot of customer loyalty. Its REDcard credit and debit cardholders contribute to 9% of the company’s sales, with analysts expecting that to climb to 12% next year. Target offers cardholders a 5% discount – handy for the top 25% of users who spend more than $3,000 or more annually.

Card users paid back debt better than a year ago, leaving Target with bad debt expense of just $15 million, compared to $138 million a year ago.

“Target’s got a better shopping experience, they understand their consumers better, and I think it’s a clean place to go,” said Money Morning Chief Investment Strategist Keith Fitz-Gerald. “They’re not even getting started in international sales so they’ve still got that opened to them as well.”

Target is trying to tap into international markets, where consumer sales are better than in the United States. It plans to sell its credit-card receivables business as early as this year to fund a Canada expansion project. The company was able to improve the credit unit of business as more cardholders paid off debt and the company instituted stricter lending standards to ensure repayment.

Wal-Mart reported its ninth-straight quarter of same-store sales losses for its U.S. unit. Overall profit was up 5.7%, carried by overseas gains, but the U.S. business continues to suffer.

“Wal-Mart forgot who the core consumer was and tried to get fancy, and I think it’s going to hurt them for a little while,” said Keith Fitz-Gerald.

A report in early August from consultancy WSL Strategic Retail showed 86% of Wal-Mart shoppers no longer felt the leading discounter offered the lowest prices, but instead dollar stores were cheaper alternatives.

Indeed, a pricing survey by Morgan Stanley (NYSE: MS) analyst Mark Wiltamuth showed Wal-Mart’s lead over grocers fell to a 15% to 20% price difference from 30% in 2008.

Reaffirming its low-price guarantees in consumers’ minds will be Wal-Mart’s biggest challenge, especially as shoppers check out other discounters and enjoy the shopping experience more. Even if Wal-Mart maintains slightly lower prices, the appearance and employee attitude at stores needs to be top-notch to compete with Target, known for its clean, bright environment.

How to Win with Retail

Investors looking for retail-sector winners need to be picky – just like consumers will be as long as the U.S. economic outlook remains shaky.

Laura Gurski, head of consultancy AT Kearney’s retail practice, said the successful retailers will be the ones that closely control pricing and product offers.

“Retailers have fine-tuned their understanding of how people are buying and have figured out how to manage their inventories and hold off on markdowns to drive better profitability,” said Gurski.

Besides Target’s competitive advantages, another company standing out among struggling retailers is Walgreen Co. (NYSE: WAG).

“I think the whole drug store area is the way to go. I like Walgreen’s,” said “Bulls & Bears” panel member Smith. “They’re one of the dominant players there. They continue to grow; in fact, they even continue to inch into the Wal-Mart arena with general merchandise. I think it’s a solid play.”

← Forex Social Networks
How to chose a Forex Broker →