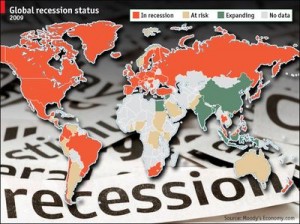 WASHINGTON — Discouraging economic data from around the globe have heightened fears that another recession is on the way.

The rising anxiety ignited a huge sell-off in stocks that led many investors to seek the safety of U.S. Treasurys.

Economists say the economic weakness and the stock markets’ wild swings have begun to feed on themselves. Persistent drops in stock prices erode consumer and business confidence. Individuals and companies typically then spend and invest less. And when they do, stock prices tend to fall further.

“A negative feedback loop … now appears to be in the making” in both the United States and Europe, Joachim Fels and Manoj Pradhan, economists at Morgan Stanley, said in a report Thursday. Both economies are “dangerously close to a recession. … It won’t take much in the form of additional shocks to tip the balance.”

The risk of a recession is now about one in three, according to Morgan Stanley and Bank of America Merrill Lynch.

Among the worrisome economic signs:

It would be the first decline since July 2009 – a worrisome sign because manufacturing has been a key source of U.S. growth in the two years since economists say the Great Recession ended.

_ U.S. home sales fell in July for the third time in four months, the National Association of Realtors said. Sales dropped 3.5 percent to a seasonally adjusted annual rate of 4.67 million homes. That’s far below the 6 million homes that economists say must be sold to sustain a healthy housing market.

Sales are lagging behind last year’s pace – the weakest since 1997. “There seems to be a correlation between the stock market and home prices,” said Andrew Davidson, a New York-based mortgage industry consultant.

_ In Asia, Japan’s exports fell for a fifth straight month. The world’s No. 3 economy has fallen into a recession since its earthquake and tsunami in March. Its weakness is contributing to the global slowdown.

_ Consumer prices rose 0.5 percent in July, mostly due to more expensive gas and food. The “core” price index, which excludes volatile food and energy prices, rose 0.2 percent. The higher prices add to the burdens for Americans already squeezed by stagnant pay, though economists don’t expect prices to rise much further. And gasoline has fallen this month.

European banks are being forced to pay more for the short-term loans they need to finance day-to-day operations. Some with heavy exposure to the debts of Greece and other weak countries are relying on loans from the European Central Bank because other private banks are reluctant to do business with them.

The ECB said Thursday that one bank had borrowed $500 million a day for seven days through the ECB’s dollar lending program. It was the first time since February that a bank had used the program. The bank wasn’t identified.

After all the volatility of the past month, the Dow Jones industrial average has lost more than 14 percent since July 21. That includes Thursday’s drop of more than 419 points.

Some sectors of the U.S. economy still show strength. Retail sales are up. Gas prices have fallen. And job growth has been consistent, though below what’s needed to reduce the unemployment rate.

Yet a consumer survey taken this month showed confidence in the economy fell to the lowest level in 31 years.

Morgan Stanley’s calculation of a one-in-three risk of a new recession hinges, in part, on its expectation that Congress will let a Social Security tax cut, a business tax credit and extended unemployment benefits expire at year’s end. It calculates that the expiration of those measures would reduce U.S. growth by 0.5 to 1 percentage point in 2012.

Jitters over the economy and financial markets may also reduce auto sales. That would be a blow to an industry that reported strong profits and healthy hiring earlier this year. J.D. Power and Associates has cut its 2011 sales forecast last week by 2 percent and its 2012 forecast by 3 percent.

On Tuesday, France’s president, Nicolas Sarkozy, and German Chancellor Angela Merkel held an emergency meeting to discuss the continent’s sluggish economy and debt crisis. Disappointment in the outcome of the meeting has contributed to the sell-off in European bank shares.

“All we got was more taxes and more bureaucracy and more austerity,” said Neil MacKinnon, an economist at VTB Capital in London.

Still, Neil Dutta, an economist at Bank of America Merrill Lynch, said that most of the negative indicators, including the Philadelphia Fed index, reflect sentiment, rather than actual economic activity. Measures of the actual economy, like the number of people seeking unemployment benefits, haven’t declined nearly as much.

The number applying for benefits rose 9,000 last week to a seasonally adjusted 408,000. The four-week average, a more reliable gauge of the job market, dropped for a seventh straight week to 402,500, the lowest level since April. The report suggests that the economy is creating jobs but not nearly enough to lower the high unemployment rate.

“We are not ready to say this is the death knell for the U.S. economy,” Dutta said. Still, recession risks are rising, he added.