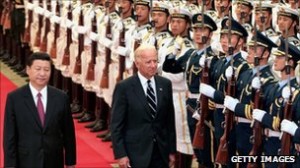 US Vice-President Joe Biden has told his Chinese counterpart Xi Jinping that global economic stability rests on the US and China finding common ground.

Speaking on the first day of an official visit to China, Mr Biden said a close relationship with China was of the “utmost importance”.

The trip comes amid mounting tension between the two over America’s debt.

China is the US government’s biggest foreign creditor and has been critical of America’s “addiction to debt”.

Chinese state-run media has been scathing over the recent political showdown in the US over how to increase the debt ceiling and avert a financial default.

China holds $1tn (£608bn) of US debt, and has called on the country to do more to reduce its budget deficit.

The downgrade was a major embarrassment for the administration of US President Barack Obama.

Analysts say China is also clearly worried about its holding and about criticism at home for having so much of the country’s savings in US investments.

During round-table talks, Mr Xi – who is widely tipped to be China’s next leader – made clear that economic concerns were for now dominating the relationship between the two nations.

“As the world’s two biggest economies, China and the United States have a responsibility to strengthen macro-economic policy co-ordination and together boost market confidence.”

Speaking in Beijing’s Great Hall of the People, Mr Biden said: “I am absolutely confident that the economic stability of the world rests in no small part on co-operation between the United States and China.”

He said: “It is the key, in my view, to global stability.”

Chinese state media said the debt crisis and the value of China’s currency would be the main focus of talks.

However, the BBC’s Michael Bristow in Beijing says there has been little talk about how China’s own economic problems have left it exposed to changes in the value of the dollar.

During the five-day trip, Mr Xi is also expected to underline Chinese opposition to plans to sell US fighter jets to Taiwan.

The Obama administration is to decide by 1 October whether it will sell F-16 fighter jets to Taiwan.

The China Daily newspaper said the potential arms sale was the biggest source of disagreement between the countries.

Mr Biden is visiting China at the invitation of Mr Xi, as the Obama administration seeks to strengthen ties with the next generation of Chinese leaders.

Mr Xi is widely expected to take over the chairmanship of the Chinese Communist Party in 2012 and to be formally anointed as president in March 2013.

This visit, which was agreed in January, will pave the way for Mr Xi to visit Washington later in the year.

← Swiss Economy
Another Recession is on the way! →