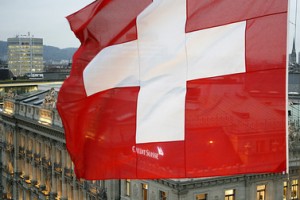 LAUSANNE, Switzerland (MarketWatch) — Switzerland is feeling the cost of its role as a port in the global financial storm after a year during which investors seeking safety from market turmoil piled into the franc and drove up its value by more than 30%.

The rise of the franc has had effects throughout the economy, analysts said, even though many of the country’s specialist exports have long been less sensitive to exchange-rate movements than low value-added consumer goods.

The European sovereign debt crisis roiling the global markets and the downgrade of the U.S. debt rating, combined with franc-denominated debts of Eastern European borrowers, have fuelled a huge demand for Swiss francs. By some measures, the currency is now as desired by investors as gold.

It’s easy to see why investors favor the Swiss franc. The country’s gross domestic product is expected to grow 2.1% this year. Unemployment is less than 3%. With a gross government debt of just 53% of GDP and an expected budget surplus, this tiny export-oriented country is a haven in the midst of debt-ridden neighbors.

Last week, the franc saw its single biggest one-day gain against the dollar, but then fell after liquidity operations by the Swiss National Bank, which said the “massive overvaluation” of the franc posed a threat to the economy.

The KOF Swiss Economic Institute’s indicator of future economic performance fell to 2.04 in July, its biggest decline since April 2009. In nominal terms, exports fell 8.2% year-on-year in June, although they actually rose by more than 4% during January to June this year.

In a strategy report published in June, Elsa Lignos, senior currency strategist at RBC Capital Markets, and her colleague Adam Cole wrote that some of Switzerland’s best-known industries including watch making and pharmaceuticals would be partly protected from currency market buffeting by their specialization and investment.

“Heavy investment in both physical and human capital diminishes the role of price in competition and as technology advances, this factor is likely to grow in importance,” the analysts said.

But there is evidence that Swiss companies are beginning to hurt. Food group Nestle SA CH:NESN +2.04% reported a 14% drop in first-half net profit, hit by a soaring domestic currency and increased raw material prices.

Another major Swiss company, drug giant Novartis AG NVS +0.15% , CH:NOVN +1.84% reported a 9% rise in first-half earnings per share in dollar terms, but the rise would have been 11% in constant currencies. Novartis reports earnings and sales in U.S. dollars, but has many costs in Swiss francs. A spokesperson for Novartis said the company was “fortunate to have a broad international base, that insulates us to a large extent from movements in a single currency, but we continue to work to align our revenues with costs to mitigate the impact even further.”

“All sectors have been affected but not to the same degree. The relation between exchange rate and exports could take more time to materialize,” said Bruno Parnisari, head of short-term economic analysis at the Bern-based State Secretariat for Economic Affairs, in emailed comments.

He noted that without the franc’s appreciation, growth could have been stronger in those sectors that continue to grow now.

Sophisticated hedging mechanisms and demand from Asian countries have helped exports, for now.

“Some losses in the euro markets (U.K., Germany) due to a strong franc are almost compensated by continuing growth from emerging markets like Russia, India, China among others,” said Mario Luetolf, managing director at the Swiss Tourism Federation, in an email.

Banks, whose assets are several times bigger than Switzerland’s GDP, contributed to the rise in the franc in 2009 as they cut down debt, strengthened their balance sheets and shifted their assets to a more franc-denominated concentration.

“There have been two specific bank related CHF inflows. In 2009 the story was all about contraction in bank leverage and associated bank balance sheet size. This was CHF positive in terms of flows,” said Geoffrey Kendrick, foreign-exchange strategist at Nomura in London.

“Then the story changed to one of a change in currency mix of bank assets. Before the crisis 32% of Swiss bank assets were held in CHF. This is now 49% and still increasing,” he said in an email.

However, banks don’t benefit much from the current strength of the currency, said Jean-Marc Felix, member of senior management at the Swiss Bankers Association, because they account for only 5% of the market share in worldwide currency trading.

The demand for francs has also been fuelled by borrowers in Eastern European countries who have loans in Swiss francs. These debtors in Hungary and Poland are now waiting to repay loans that were taken out on the back of low interest rates in Switzerland.

Reining in the rise

A slew of policy measures have been suggested to slow or reverse the franc’s rise to ease the pressure on exporters, including central bank intervention, lower interest rates, capital controls, bridging loans and emergency tax cuts.

Earlier this month, the central bank slashed its reference rate by 50 basis points. With short-term deposit rates below zero, investors are paying to park money in Switzerland.

Last week, when the Federal Reserve promised a loose monetary policy till 2013, the franc rose to a record 0.7085 against the dollar. To counter the rise, the Swiss National Bank expanded liquidity operations and conducted foreign-exchange swap transactions. Soon after, the franc fell sharply against the euro and the dollar.

Then, following speculation the central bank might resort to a temporary peg to the euro, the franc almost reached parity with the euro.