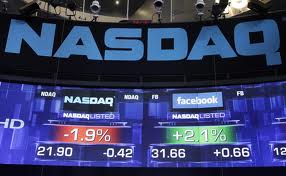 By CHRISTINA REXRODE and PALLAVI GOGOI
The Associated Press

Investor anger mounted Wednesday over the initial public offering of Facebook stock last week, which was fumbled by the banks that managed the deal and complicated by technical problems at the Nasdaq stock exchange.

Shareholders filed at least two lawsuits against Facebook and Morgan Stanley, the bank that shepherded the IPO, over reports that it withheld negative analyst reports about Facebook from some clients before the company went public.

It was the second stumble this month by a major Wall Street firm. JPMorgan Chase, usually revered for taming risk, has yet to contain a growing $2 billion loss in one of its trading units.

The missteps are further eroding the confidence of Main Street, or what was left of it after the financial meltdown of 2008, and reinforcing the sense that the game is rigged.

Judson Gee, a financial adviser in Charlotte, N.C., placed a call Wednesday morning to a client who had plowed $50,000 into Facebook stock on Friday, the day of the IPO.

Gee said he called to tell the client, a restaurateur, about reports that Morgan Stanley had told only select customers about an analyst’s reduction of revenue estimates for Facebook just before the IPO.

“I could see his jaw dropping on the other side,” Gee said. “A lot of expletives came out.” He said his client had asked: “How can they give that information to the big boys and not give it to the public?”

In the final planning of the IPO, Facebook, working with Morgan Stanley, raised the total number of shares being offered for sale by 25 percent, to 421 million. They expected extraordinary demand for the stock by investors.

That appears to have been a miscalculation. Facebook stock jumped from $38 to as high as $45 in the opening minutes, but quickly sank toward $38 again. It dropped to about $34 on Monday and $31 on Tuesday. The stock recovered somewhat on Wednesday and climbed $1.

Dayna Steele, a motivational speaker in Houston, said she planned to wait and buy the stock “when everybody finishes suing each other.”

The shareholder lawsuit, filed in federal court in Manhattan, accuses Morgan Stanley of withholding the negative analyst report from some clients while it prepared to take the stock public.

One of the investors suing, Dennis Palkon, a professor at Florida Atlantic University, said that IPOs are tricky, but “this one had a lot of glamour, had a lot of interest. It has a lot of users. I thought it’d be a pretty good investment.”

He bought 1,800 shares of Facebook at $38 through his ETrade account, meaning that after Tuesday, he was down more than $12,000 on paper.

“I think there were problems all over the place,” he said. “It was totally poor planning to raise the price as high as they did and then to add all those extra shares.”

Morgan Stanley declined comment on the suit, but it said on Tuesday that it had complied with regulations in how it handled analyst reports before the IPO. Facebook called the lawsuit “without merit.”

The Senate Banking Committee, the Securities and Exchange Commission and other regulators also plan to look into the IPO.

Regulators will probably want to comb over Facebook’s prospectus, the information it provided to potential investors, to make sure the company’s disclosures were accurate and complete.

State securities laws and industry rules, mostly broader in scope than SEC rules, give state and industry regulators a wider berth to sanction investment firms that they accuse of failing to act in investors’ best interest.

The first trading in Facebook stock, originally set for 11 a.m. Friday, was delayed half an hour by technical glitches at the Nasdaq Stock Market, and brokerages are still sorting through problems with orders.

A person familiar with the matter, speaking on condition of anonymity because the person was not authorized to speak publicly, told The Associated Press that Facebook was in talks with the New York Stock Exchange to move its stock listing there from Nasdaq.

He has said the bank was hedging against financial risk, but regulators have questioned whether it was a gamble for profit instead, and have seized on the loss to make the case that Wall Street has not cleaned up its act.

Lisa Lindsley, director of capital strategies for the American Federation of State, County and Municipal Employees, which has 1.6 million members and handles pension assets of $850 million, said the union was “very concerned about the lack of internal controls at all three firms,” referring to Facebook, JPMorgan and Morgan Stanley.

Elizabeth Warren, architect of the Consumer Financial Protection Bureau and a Democratic candidate for Senate from Massachusetts, said Wall Street has lost an image that once said, “We are solid and we will be here forever.”

“Banking should be boring,” she said, “because boring creates confidence.”

As if small investors needed a reason to feel queasier, the stock market is having its worst month of the year, mostly because of concerns about a debt crisis in Europe and whether Greece will exit the euro currency group.

The Dow Jones industrial average gained 9 percent during the first four months of the year, but that has withered to 2 percent.

The Standard & Poor’s 500 index more than doubled in the three years after its financial crisis low, in March 2009, and is still up 93 percent. But small investors, mistrustful of the market, are still pulling money out of stocks.

Investors withdrew $85 billion from U.S. stock mutual funds last year and have pulled more money out than they put in for five years in a row — significant given how many Americans automatically put money in through 401(k) accounts.

They had already withdrawn $6 billion through April this year, and the decline in May figures to make the withdrawals accelerate.

To be sure, Main Street has a love-hate relationship with Wall Street. For the 1980s and 1990s, and for much of the 2000s, it tilted toward love, and bankers were hailed as masters of the universe.

When booms turn to bust, as after the crash of 1987, the bursting of the dot-com bubble in the early 2000s and crisis of 2008, the relationship quickly turns sour.

But for the institutions of Wall Street, these recent missteps could hardly come at a worse time. The presidential election is less than six months away, and the economy and the role of large financial institutions figure to play large roles.

When Congress passed an overhaul of financial laws in 2010, it was designed to prevent a repeat of the 2008 crisis. The details are still being written, and the financial services industry is fighting hard against many of those changes.

William Black, a former bank regulator who now teaches law and economics at the University of Missouri at Kansas City, said he believed the banks would still be able to water down the regulatory changes, even after these embarrassments.

The banks, he said, “are bringing a gun to a knife fight.”

But the issues are not clear-cut. Michael Barr, a law professor at the University of Michigan who was an architect of the overhaul, said he was concerned that the Facebook episode might make it harder for other companies to raise money by taking themselves public.

“The more the system feels like it’s rigged, the harder it is going to be for companies to raise money and for investors to freely participate,” he said.

Ernie Patrikis, a former top official at the Federal Reserve’s New York branch who is now partner in the banking regulatory practice at the law firm White & Case, said banks deserve part of the blame for spooking investors in 2008.

But he said regulators have been more rigorous since, some financial institutions have closed, and “a lot of CEOs went missing.”

“I don’t want to see a day of reckoning” for the banks, he said. “The banks are our lifeline.”—