A growing number of central bank buyers saw demand in this sector rise 22% y-o-y to 148.4t, the highest level of quarterly net purchases since 2015.

Technology registered its eighth consecutive quarter of y-o-y growth, up 1%. Sharp outflows in gold-backed ETFs offset growth across much of the gold market.

Central bank gold reserves grew 148.4t in Q3, up 22% y-o-y. This is the highest level of net purchases since 2015, both quarterly and y-t-d, and notable due to a greater number of buyers.

Demand for gold in technological applications rose in Q3 by 1% y-o-y, to 85.3t. This marks the eighth consecutive quarter of growth, primarily driven by gold’s use in electronics such as smartphones, servers, and automotive vehicles.

ETFs shed 103.2t in Q3. ETFs saw a 116t decline when compared with inflows of 13.2t  in Q3 ’17, experiencing the first quarter of outflows since Q4 2016. North America accounted for 73% of outflows, fuelled by risk-on sentiment, the strong dollar, and price-driven momentum.

Global gold-backed ETFs saw the first quarterly outflows since Q4 2016: AUM fell by 103.2t over the quarter. This represents a 116t decline when compared with inflows of 13.2t  in the same period last year.  While flows decelerated towards the end of the quarter,  September nonetheless was the fourth consecutive month of outflows, creating the longest period of monthly outflows since 2014. This wiped out gains made earlier in the year: by the end of Q3, global gold-backed ETFs had shed 42t. The trend in October, however, seemed to have reversed as ETFs have generally seen positive flows across regions.

The overall decline masks notable regional differences. North America, home to the largest and most liquid gold-backed ETFs, accounted for 73% of outflows in Q3 (around 75t) and almost 90% of outflows over the course of the year so far.

This bearish sentiment towards gold was also present in the US futures market with COMEX reported managed money net longs falling to the lowest level since 2006 and speculative net long positioning turning negative for the first time since 2001.

This is large because of the positive macroeconomic backdrop in the US. Equity markets performed well, with the S&P500, Dow Jones, and Nasdaq all hitting record highs in Q3.

The economy is motoring, inflation is edging up and the Federal Reserve is expected to continue tightening monetary conditions.

And after the low levels of Q1, the US dollar has rebounded and remained relatively strong since. US investors have, by and large, shrugged off concerns around escalating trade war tensions. 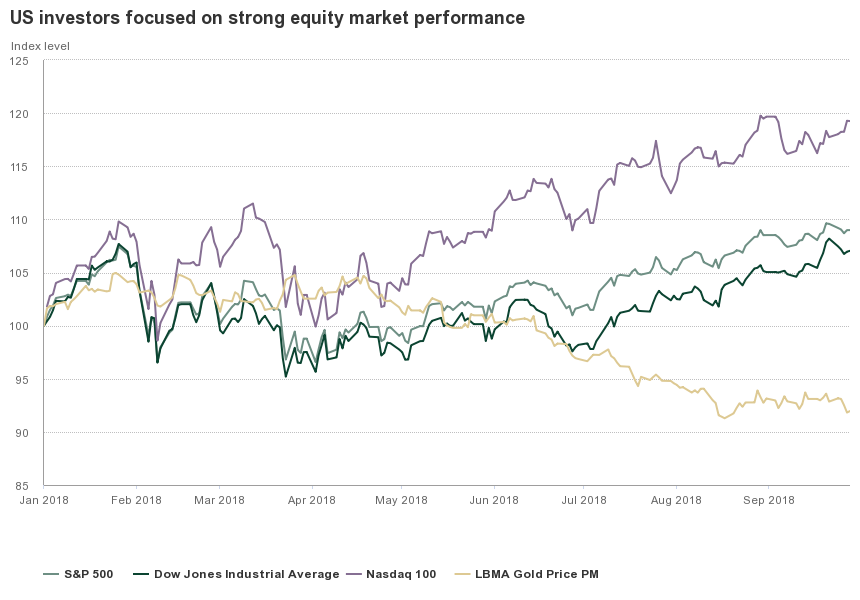