Stocks swaggered through the first four days of the past week with their usual devil-may-care attitude, then tripped into the final three hours on Friday amid scenes of civil unrest in Egypt. At the final count, the Dow Jones Industrials closed down Friday by 1.4%, the S&P 500fell 1.8%, theNasdaqfell 2.5% and the Russell 2000small-caps sank 2.5%.

For the week, the Dow was only down 0.4%, though, while the S&P was off 0.5%, the Nasdaq was flat and the Russell 2000 small-caps were actually up 0.3%.
Now investors will have a couple of days to think about what the street protests in Egypt mean for that beautiful and historic country, the freedom impulse of citizens living under totalitarianism in Northern Africa, the flow of oil and gas from the Persian Gulf through the Suez Canal, and the strength of U.S. allies in the region.

The final half hour of the tape on Friday was truly ugly, with the S&P 500 Index sinking under its 20-day moving average to close at its low for the first time in a month. In normal circumstances that might be meaningful, but with many traders out of their offices in Manhattan due to the snow and raw emotions governing many investors’ actions, it is too early to make that call.

I don’t pretend to fully understand the political dynamics of the situation in Egypt, but the G2 that I have been able to glean so far suggests that this is a lot more like the protests that brought down the Romanian dictator in 1989 than like the Islamic revolution that pivoted energy politics following the ouster of the Shah of Iran in 1980.

The difference: If a democracy movement manages to overthrow the Mubarak regime in Egypt, then reports so far suggest that a new government would not necessarily reject the country’s positive posture toward Europe, the United States and Israel — and the flow of crude oil through the Suez Canal to the EU would not be in jeopardy.

Of course if some radical group hostile to Western interests were to take power, then all bets are off: Energy prices will soar as investors bet on reduced supply, lifting most oil and gas stocks. And in contrast industrial and consumer stocks would sink as investors bet on constrained consumption amid higher prices and fear of the future.

FED UP
The afternoons on which Federal Reserve Open Market Committee meetings were concluded used to be a highlight of the monthly calendar. Now they are kind of a yawn. Bears keep expecting that maybe the Fed governors will announce that they have come to their senses and will end quantitative easing, and every month so far they have been disappointed.

The Fed’s policy statement on Wednesday afternoon said emphatically what we have discussed here endlessly: Nothing is going to stop these guys from completing their mission. Nothing. Nunca, nada, niete. The guvs said neither the most recent pick-up in up in economic growth nor the continued surge in commodity prices would deter them from continuing to buy $600 billion in Treasury debt by mid-year in an effort to lower interest rates, as they are still more worried about elevated unemployment and low core inflation.

Mind you, there were highlights. The statement was more upbeat than usual, observing a rise in consumption last year while bemoaning spending would be constrained this year. The statement also nodded at the rise in commodity prices — hey, cotton’s only at a 150-year high, no biggie — but they said emphatically that inflation expectations are still stable and underlying inflation is low. And you know in my view that is correct: As long as home prices and wages remain very subdued, it’s almost impossible to see a big pickup in inflation.

Now the good news at the Fed is that the recent fiscal stimulus passed has taken some pressure off the guvs to try to amp up demand via monetary policy measures. The real test for these guys is going to come mid-year when they have to decide whether to keep up the asset-buying program even if jobs are not back in gear.

My expectations is that they will transition QE2 into QE3 because they have shown not one iota of inclination to take their foot off the gas pedal until they accomplish their goal of improved employment. This should continue to keep a firm bid under the market, all other things being equal (which they never are).

Bottom line: This Federal Reserve board has been the most accommodative in history and every time they have a chance to prove that … they do. As a result the stock market can still slide 5% to 10% anytime it darn well chooses, but it is not going to make any major headway to the downside as long as the Fed keeps the money spigots wide open.

DAS RHEINGOLD
I have been positive on the Old World recently, and received some mail asking why I could be positive on Germany if the European Union was in such turmoil.

The reality is that Europe has been in turmoil for about 2,000 years, though we might as well go ahead and say all of recorded history. Yet it seems to muddle through and create a lot of wealth, not to mention great contributions to modern life like croissants, Porsches and the classic London pub. 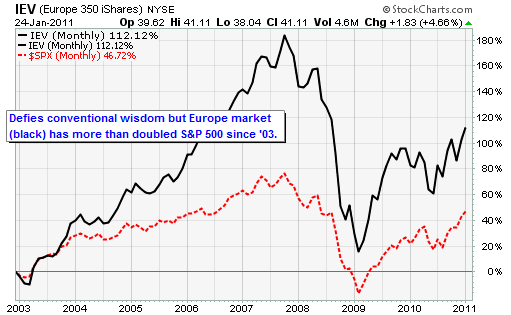 Forget about the EU for a moment: Look how long it took the Europeans to realign itself after the Congress of Vienna concluded in 1815. That meeting was supposed to resolve all territory disputes following the French Revolution, the Napoleonic Wars and the unraveling of the Holy Roman Empire. The map of the Continent was redrawn, creating new boundaries for France, Poland, Holland, German districts like Saxony and a hodgepodge of Italian duchies. The goal was comity among all the states that had been fighting and a cooperative governmental structure.

Well, it was a great idea but by the time of the Franco-Prussian War in the 1870s it was every country for itself again as modern Germany, France and Italy re-emerged as fully independent states. Later came World War I, then the League of Nations fiasco, then World War II, and now the European Union — just to telescope history at a million miles an hour. 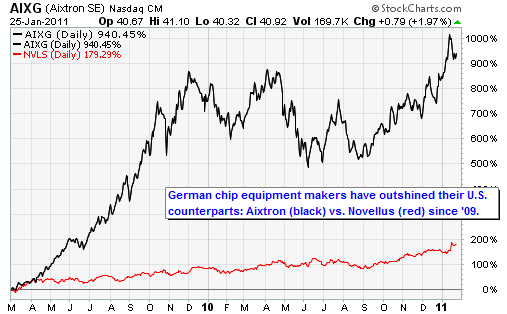 Will anyone really be surprised if Greece simply decides it is not competitive in the European Union anymore, and finds a legal way to drop out? No. How about Ireland? No. The peripheral countries all have too much debt, and the only way out — exercised for hundreds of years — is to devalue their currency. But they need their own currency first. This should not be considered a bad thing: It will just be a matter of weeding out countries that should never have joined the EU in the first place.

So how does Germany fit in? Well until the peripheral countries resign from the EU or are kicked out, Deutschland is a fantastic beneficiary of all of their fiscal problems. Berlin, Munich and Frankfort industrialists cannot believe their good fortune at benefiting from a weak euro. Because in a fully free market world, hey would be contending with a strong Deutschemark that would absolutely be trading a lot higher. German mid-caps that compete on a global stage, like semiconductor equipment makerAixtronAG (NASDAQ ADR: AIXG), above, provide a great example

I will have much more to say about Germany and other cheap and strong European economies soon over the rest of the year.

GLITTER FADES
Gold prices are looking bearish, as are the gold miners, silver and the silver miners. Part of the reason is that central banks outside the United States are tightening interest rates. Emerging markets like South Korea are tightening a lot, while others such as South Africa, Chile and Thailand are only implying through communications and monetary policy that more tightening is on the way.

This is opposite of what happened in the summer when the Federal Reserve here in the United States, as well as the European Central Bank and the Bank of Japan all went to more accommodative positions on money. 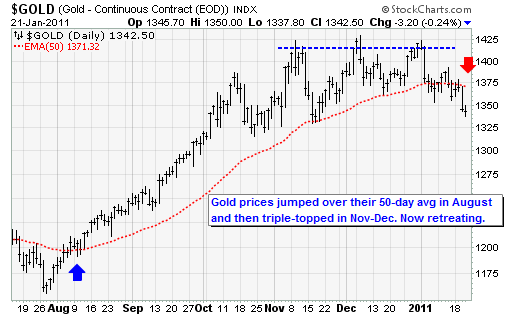 In other words, the decline in gold appears to be telling us that investors believe that the threat of inflation is ebbing. It has triple topped, as you can see in the chart above, and now is falling heavily through former support.

We made a great trade in gold and gold miners over the past four months. Our last positions was in the 9Market Vectors Junior Gold MinersETF (NYSE: GDXJ) fund, in which we peeled off a 14.5% gain starting Sept. 17. That was sold in late 2010, and shares are almost $3 lower now.

You just cannot fall in love with speculative positions like this. Gold may have a lot going for it as an alternative to “fiat” money and the rise in demand among the newly affluent in emerging markets. But it is still a commodity subject to the whims of investor supply and demand, and it simply became over-loved at a time when its fundamentals as a bulwark against inflation were deteriorating.

From a technical perspective, gold has one last shot at getting back on track by zipping back to levels seen in the middle of last week pronto. If it cannot, gold is probably headed down to the $1,150 to $1,225 area, where it would be a great buy again.

Profit From the One Company That Will Win the “Mobile Internet” Gold Rush
A Rescue Plan for the U.S. Economy
Best Investments For 2011