Global markets have climbed and the price of oil fallen after Hosni Mubarak stepped down as Egypt’s president.

There had been concerns that almost three weeks of anti-government protests could have spread across the region and added to market volatility.

Oil had been trading higher earlier in the day, but fell after the news broke. 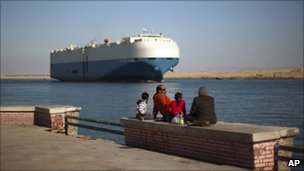 While not a major oil producer, Egypt plays a key role because it controls the Suez Canal, a major route for oil tankers and cargo ships.

Over the past three weeks, investors have been worried that unrest in Egypt could spread to nearby oil-producing nations, disrupting supplies.

However, Inenco energy analyst Zakir Lorgat said that there would continue to be volatility in the oil market.

“A power-vacuum now exists, so the oil markets will continue to be jittery until a decision is reached on what the Egyptian Government will look like going forward,” said Inenco energy analyst Zakir Lorgat.

“The market will be worried about the risk of contagion within the region and whether the Egyptian example will create a domino effect . They will be looking to be reassured that the region will remain stable over the coming weeks and months.”

In London, the FTSE 100 shrugged off heavy losses to finish 0.7% higher at 6,062.9 points, while the key French and German markets also enjoyed late surges.

← Why you should Buy Rice Futures
Global Investing Strategies →