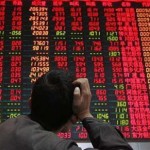 NEW YORK -Fears over the escalating nuclear crisis in Japan overtook financial markets around the globe Tuesday, pushing stocks and other investments lower. The Japanese stock market lost 10 percent of its value, and Wall Street dropped steeply before bouncing back.

The Japanese Nikkei average fell to its lowest level in nearly two years after the country’s prime minister said four crippled reactors at a nuclear power plant on the country’s devastated coast were leaking dangerous amounts of radiation.

In the U.S., the Dow Jones industrial average fell almost 300 points at the opening bell. The futures market, which can indicate how stocks will perform, looked so ugly before trading began that the New York Stock Exchange invoked a special rule to smooth volatility.

The Dow recovered somewhat later in the day but still closed down 138 points, or more than 1 percent.

Investors sold stocks primarily because of fear that the disaster in Japan would slow down the global economy. Japan is the world’s third-largest economy, manufacturing goods from computer chips to automobiles, and buys 10 percent of U.S. exports.

The jarring day came less than a week after the two-year anniversary of the low point for the markets after the 2008 financial crisis. Stocks have almost doubled in value since March 9, 2009.

Over the last five trading days, however, the Standard & Poor’s 500 index has nearly lost 3 percent because of higher oil prices, signs of weaknesses in China’s economy, and the still unknown impact of the quake and tsunami in Japan.

“Markets are going to remain on edge until we know the full extent of the situation in Japan,” said Michael Ryan, chief investment strategist with UBS Wealth Management.

The Japanese markets have taken a huge hit since the quake and tsunami struck last week. The Nikkei average fell a staggering 10.6 percent Tuesday, more than 1,000 points, and has suffered its worst two-day loss in 40 years.

In addition to Japan, investors on Wall Street fretted about the Middle East, where Saudi Arabian troops moved into Bahrain and Libya’s oil exports ground to a halt because of the rebellion against leader Moammar Gadhafi. Government bonds and other assets considered safer investments rose in price.

Stocks pared earlier losses after the Federal Reserve said that the U.S. economy was on “firmer footing.” Still, 29 out of the 30 stocks that make up the Dow industrial average closed lower for the day.

Intel Corp., and Cisco Systems Inc. had the steepest falls, in part because they depend on Japanese factories for products or parts. Insurer Aflac Inc., which does 75 percent of its business in Japan, fell nearly 6 percent, the biggest drop in the S&P 500.

The Dow Jones industrial average closed down 137.74 points, or 1.1 percent, at 11,855.42. The S&P fell 14.52 points to 1,281.87. All 10 types of companies that make up the index finished lower. Utilities had the largest fall, losing 1.9 percent, because of concerns that the disaster in Japan will make countries rethink plans for nuclear energy. First Solar, a company that makes solar panels, gained 8.1 percent to lead the S&P index.

The Fed’s statement pushed government bond prices down from their highest levels of the year. Bonds typically rise when investors seek safer assets and fall when the economy is growing.

In response to questions from the Senate Banking Committee on Tuesday, Treasury Secretary Timothy Geithner dismissed worries that Japan, which holds the most American government debt after China, would sell its holdings to pay for its rebuilding efforts.

“Japan is a very rich country and has a high savings rate,” he said. It “has the capacity to deal not just with the humanitarian challenge but also the reconstruction challenge they face ahead.”

If Japan dumped its holdings, it could force Treasury prices down and yields up. That would force long-term interest rates higher and put the U.S. economic recovery at risk.

The opposite happened after an earthquake devastated Kobe, Japan, in 1995, according to a report from economists at the Royal Bank of Canada. By 1997, Japan had actually doubled its Treasury holdings to $300 billion.

The yield on the benchmark 10-year Treasury note fell to 3.32 percent from 3.36 late Monday.

Oil prices fell $4 to $97.18 a barrel, their lowest level in two weeks, because demand for energy is expected to fall in Japan, the world’s third-largest importer of oil. Questions over how long it will take the Japanese economy to recover pushed commodity prices lower around the globe. Wheat, corn, and sugar contracts all fell by 5 percent or more.

Other Stories
Buy, Sell or Hold
Currency Investing Where to Turn
Oil could reach $300 a Barrel
Gold prices will hit $2,500 in the near future
Global Investing Strategies
Profit From the One Company That Will Win the “Mobile Internet” Gold Rush
Different Investment Methods
Trade Spot Gold Online
Trade Oile Online
Trade Commodities Online
With Egypt in Turmoil, Oil and Food Prices Climb
Why you should Buy Rice Future
Shares rally as Mubarak resigns
Why you should Buy Rice Future