The British Pound has risen almost 15% against the Dollar over the last twelve months. It seems that the markets are ignoring the fiscal concerns that sent the Pound tumbling in 2010, and focusing more on inflation and the prospect of interest rate hikes. At this point, the Bank of England (BOE) is now racing with the European Central Bank (ECB) to be the first “G4″ Central Bank to hike rates. 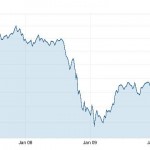 You can find cause for optimism towards the Pound in technical factors alone. That’s because while dozens of currencies appreciated against the Dollar in 2010, most were starting from a stronger base. For example, the Canadian and Australian Dollars collapsed during the credit crisis. However, both currencies made speedy recoveries to the extent all losses were erased in only two years. The British Pound, in contrast, still remains 25% below its pre-credit crisis high, more depressed than perhaps any other currency.

On the one hand, this is probably justifiable. The British economy is still in abysmal shape; the latest GDP figures revealed a .6% contraction in the fourth quarter of 2010. Meanwhile, the ECB forecasts only 1.4% growth in 2011, and many analysts think that might even be too optimistic. With the exception of Japan, which suffers from a unique strain of economic malaise (not to mention the 5% hit to GDP caused by the earthquake), the UK is unequivocally the weakest economy in the industrialized world.

On the other hand, this is mostly old news. The reason that investors are starting to get excited is interest rate hikes. According to the minutes from its March meeting, the BOE voted 6-3 to hold its benchmark interest rate at .5%. That means its awfully close to acting. The market consensus is for a 25 basis point rate hike in the next three months, and 2-3 additional hikes over the rest of the year. Depending on how the other G4 Central banks act, that will put the UK rates at the top of the pack.

However, it’s unclear how extensive this tightening will be. According to one analyst, “The probability of a hike in the next three months is significant but the lingering credit crunch, fiscal tightening and bleak outlook for real incomes suggest that if this is the beginning of a tightening cycle, it will be a very shallow one.” Moreover, low bond yields suggest that long-term inflation expectations (and hence, the need for rate hikes) remain low.

At this point, it looks like the UK is looking at a few years of stagflation. That’s certainly going to be bad for UK consumers and probably negative for most UK asset prices. However, short-term currency speculators are less concerned about economic fundamentals, and more concerned about (risk-adjusted) interest rate differentials. That means that if the BOE fulfills expectations, the Pound will probably get a little short-term kick.