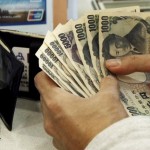 The tragedy in Japan is only just now beginning to be understood as various reports come in of thousands of deaths, massive flooding, and nuclear facilities that are in danger. Because of this, traders will have to be pragmatic as far as how they approach the FX markets, especially when it comes to the Yen.

While you might be thinking it would cause the value of the Yen to fall, the truth is the opposite. The Yen is a currency that tends to be sent around the world, and many funds use it to bankroll their operations around the globe. This is the reason why the value of the currency will rise; they will start to bring that money home.

Also, it should be noted that the government is about to put a lot of money to work, and aid is coming in from worldwide allies. This aid will have to be converted to Japanese assets, which means Japanese Yen. The conversion will be brutal, and the Yen will certainly rise in this environment.

However, it should be noted that the Bank of Japan will be looking for ways to cut the rate climb, as cheap money is needed to bankroll all of the various construction projects that will be needed around the island. Although it seems counterintuitive, this disaster will actually be somewhat simulative for the Japanese economy.

For the foreseeable future, there is going to be money flowing into Japan, and this will ensure that the Yen starts to rise in value as converting to it is a must for all of the various agencies and governments that are involved. This creates artificial demand for the currency, but the markets won’t mind, they will simply buy Yen until the crisis is over. Unfortunately for Japan, it will be a while before that is true.

In some ways, the winner in all of this is going to be the Euro, as there had been some rather inquisitive minds asking questions of its sovereign debt. (Again.) But with the market suddenly having to shift focus, this might have bought Europe some time to get its fiscal house in order as the world ignores it.

No matter what happens, one thing is for sure: the markets are going to be very volatile in the near term in many currency pairs, but especially so in pairs that involved the Yen.