By Nikolaj Gammeltoft and Rita Nazareth 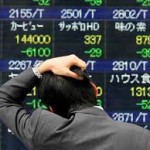 The Standard & Poor’s 500 Index fell 0.6 percent to 1,296.39 at 4 p.m. in New York, paring a drop of as much as 1.4 percent as energy shares rebounded. The Nikkei 225 Stock Average plunged 6.2 percent, with about $285 billion in equity value erased from the Japanese market. Ten-year Treasury yields lost 4 basis points to 3.37 percent. Oil reversed losses after dipping below $99 a barrel. The euro rose against 15 of 16 major peers.

Companies that operate nuclear power plants or supply the fuel helped lead stocks lower, with Entergy Corp. down 4.9 percent in New York and Cameco Corp. tumbling 13 percent in Toronto, while natural gas rallied amid speculation that the atomic-energy industry will suffer as Japan works to contain radiation at damaged reactors. Tiffany & Co. and Coach Inc. lost more than 5.2 percent for the biggest declines in the S&P 500 on concern sales of luxury goods in Japan will slow.

“There’s a whole world of worries now,” said Mike Ryan, the New York-based head of wealth management research for the Americas at UBS Financial Services Inc., which oversees about $741 billion. “But the markets are actually being pretty orderly considering we got the after-effects of the Japanese earthquake, including the risk of a nuclear accident, which would be a game-changing event.”

The slump in the Nikkei 225 (NKY) pushed the index to the lowest level in four months as the official death toll from the quake reached 1,823, with 2,369 more missing. Tokyo Electric Power Co., which is battling to contain radioactive material at its damaged Fukushima nuclear plant, tumbled 24 percent. Toshiba Corp., a maker of nuclear reactors, slid 16 percent.

Default swaps on Tokyo Electric Power soared 258 percent to a record 146.5 basis points, while contracts on Japan jumped 11 to 94, the highest since July, according to CMA.

The Bank of Japan pumped a record 15 trillion yen ($183 billion) into the financial system and doubled the size of its asset-buying program to shield the economy from the effects of the quake.

“The market is pricing in a better understanding of the enormity and complexity of the two natural disasters that struck Japan,” said Mohamed El-Erian, chief executive officer at Newport Beach, California-based Pacific Investment Management Co. “The immediate impact will be felt through lower global aggregate demand, disrupted supply chains and funds flows into Japan.”

The S&P 500, the benchmark gauge for U.S. equities, dropped for the third time in four days. General Electric Co. (GE) lost 2.2 percent. The incidents at the Japanese nuclear plants have compelled China and India to review plans for atomic energy that were set to provide a boon for suppliers such as GE. German Chancellor Angela Merkel put government plans to prolong the lifespan of the nation’s nuclear plants on hold for three months pending the outcome of an inquiry into reactor safety.

Utility companies in the S&P 500 lost 1.4 percent as a group. Exelon Corp., owner of the largest group of U.S. nuclear power plants, fell 0.6 percent. The shares pared a plunge of as much as 5.5 percent after the company said its plants are safe given seismic patterns. Fifteen U.S. reactors use a similar design to the General Electric unit at Tokyo Electric’s Daiichi No. 1, Hugh Wynne, a New York-based analyst for Sanford C. Bernstein & Co., wrote in a note to clients today. “Exelon in particular has relied heavily on this design.”

S&P 500 financial shares tumbled 1 percent collectively. Hartford Financial Group Inc., which booked about 15 percent of its revenue in Japan in 2009, lost 2.8 percent. Aflac Inc., the provider of supplemental disability insurance which had 76 percent of sales in Japan in 2010, lost 3 percent.

Producers of uranium for nuclear plants also slumped, with Canada’s Cameco tumbling as much as 23 percent for its biggest intraday drop since going public in 1991 and Denison Mines Corp. sinking 22 percent in Toronto. Solar and wind-energy companies advanced, with First Solar Inc. climbing 5.1 percent on the Nasdaq Stock Market

Lubrizol Corp., the world’s largest producer of lubricant additives, rallied 28 percent after Warren Buffett’s Berkshire Hathaway Inc. agreed to buy the company for about $9 billion in its second-biggest acquisition in the past five years.

The S&P 500 has retreated 3.5 percent from a 32-month high on Feb. 18 amid concern a surge in oil prices will hinder the economic recovery. The index is still up almost 92 percent from a 12-year low in March 2009 and is trading at 15.2 times its companies’ reported operating earnings, compared with an eight- month high of 15.8 on Feb. 18, according to data compiled by Bloomberg.

“The U.S. market is a tad on the expensive side and it is vulnerable to a correction,” said Tom Mangan, who helps oversee $2.5 billion as a money manager at James Investment Research Inc. in Xenia, Ohio. “The events in Japan certainly helped push it in that direction. On the other hand Europe seems to be resolving some of its debt problems, while merger activity like we saw today creates hope, but overall we’re due for a set- back.”

Four stocks fell for every two that gained in the Stoxx Europe 600 Index, which slid 1.1 percent to the lowest level since Dec. 6. Swiss Reinsurance Co. and Munich Re, the world’s biggest reinsurers, lost more than 3.3 percent. Burberry Group Plc (BRBY) sank 4.3 percent in London, leading luxury-goods companies lower amid speculation sales in Japan may suffer.

Officials in Europe widened the scope of their 440 billion- euro ($614 billion) bailout fund and eased the terms of Greek rescue loans, even as they resisted calls to buy bonds in the open market or finance buybacks.

Banco Santander SA, Spain’s biggest lender, led European banks to the only gain among 19 industries in the Stoxx 600. The euro climbed 0.7 percent to $1.3998, and jumped 0.5 percent against the yen to 114.37. The Australian and New Zealand dollars fell against most counterparts.

Rubber for August delivery, a material used by carmakers, plunged as much as 13 percent to 335 yen per kilogram on the Tokyo Commodity Exchange.

To contact the editor responsible for this story: Nick Baker at nbaker7@bloomberg.net

Buy, Sell or Hold
Currency Investing Where to Turn
Oil could reach $300 a Barrel
Gold prices will hit $2,500 in the near future
Global Investing Strategies
Profit From the One Company That Will Win the “Mobile Internet” Gold Rush
Different Investment Methods
Trade Spot Gold Online
Trade Oile Online
Trade Commodities Online
With Egypt in Turmoil, Oil and Food Prices Climb
Why you should Buy Rice Future
Shares rally as Mubarak resigns
Why you should Buy Rice Future

← Currency Investing: Where to Turn When the Dollar, Euro and Pound Let You Down
Buy, Sell or Hold →