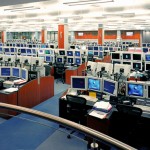 Economic growth is falling short of forecasts and market participants may need to reduce their yield predictions, Jim Caron, the New York-based global head of interest-rate strategy at Morgan Stanley, wrote in a report yesterday. Goldman Sachs cited Federal Reserve comments and a slower-than-forecast pace of inflation in a report the same day.

A rally in Treasuries is confounding traders and economists who predicted yields would rise as the economy improved. The opposite has happened as data showed gross domestic product growth slowed and housing market is struggling to rebound. Bill Gross, who runs the world’s biggest bond fund at Pacific Investment Management Co., said he is sticking to his bearish view on U.S. debt.

“We have recently turned neutral from bearish on bonds,” Caron wrote. “We are also tactically looking to buy bonds if yields rise. Consensus forecasts for yields are at risk.”

Treasuries returned 1.2 percent in April, the most since August, based on Bank of America Merrill Lynch data. Ten-year yields fell to a six-week low of 3.23 percent today, according to data compiled by Bloomberg. The notes yielded 3.24 percent as of 7:35 a.m. in London.

Morgan Stanley and Goldman Sachs, two of the 20 primary dealers authorized to trade directly with the Federal Reserve, both said in their reports they may turn more bearish later.
Surprise Index

Yields slid last month as the Commerce Department said on April 28 that GDP growth slowed to an annual rate of 1.8 percent in the first quarter, from 3.1 percent in the previous three months. Residential real-estate prices dropped 3.3 in the 12 months to February, the most in more than a year, S&P/Case- Shiller data showed April 26.

The Citigroup U.S. Economic Surprise Index fell to negative 6.7 yesterday, the lowest level since December, indicating that economic data are falling short of forecasts by the steepest degree this year.

Banks and securities companies surveyed by Bloomberg predict Treasury yields will keep rising. The 10-year rate may climb to 3.59 by June 30 and 3.91 percent by year-end, the companies said, with the most recent forecasts given the heaviest weightings.

“There should be little doubt that simply holding Treasuries at these yield levels for an extended period of time represents an abdication of responsibility,” Gross wrote in his monthly outlook on Pimco’s website yesterday.

Gross, 67, bet against U.S. government-related debt in March and boosted cash to be the largest of the company’s $241 billion Total Return Fund holdings.

The Fed has kept its target rate for overnight lending in a range of zero to 0.25 percent since December 2008.

The real yield, or the difference between the consumer price index and the 10-year Treasury rate, declined to 0.55 percent yesterday, the least since 2008. Based on two-year Treasuries, the real yield is negative 2.1 percent.

Goldman Sachs dropped its recommendation for investors to bet against five-year notes, Francesco Garzarelli, the London- based chief interest-rate strategist, wrote in his report.
Fuel Prices

Fed Bank of New York President William C. Dudley said on April 1 the recovery is “tenuous.” Janet Yellen, vice chairman of the Fed’s Board of Governors, said April 11 the increase in food and fuel costs will have only a temporary impact on prices and consumer spending.

The consumer-price index excluding food and energy rose 0.1 percent in March, less than the 0.2 percent increase projected in a Bloomberg survey, the Labor Department said April 15. Oil rose to a 31-month high this week.
By Wes Goodman-Bloomberg News