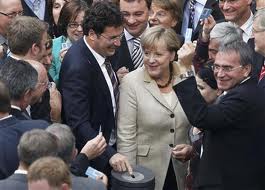 REUTERS  By Andy Bruce
LONDON (Reuters) – World stock markets will recover next year from a nightmarish 2011 that has wiped trillions of dollars off share prices, according to a Reuters poll that showed almost all major stock indexes ending 2011 in the red.
Darkening economic prospects and fears the euro zone debt crisis will unravel into financial catastrophe sent global stocks plummeting around 14 percent since the last quarterly poll of equity strategists in June.
Only the Dow Jones Industrial Average and South Korea’s KOSPI are expected to finish the year with gains compared with 2010’s closing levels, among the 19 major stock indexes covered by Reuters polls over the last week.
Still, despite the dire performance of stock markets so far this year, most respondents were stuck in their usual habit of predicting big gains, no matter what real risks face the world economy.
According to the consensus, only one index — Taiwan’s TAIEX — is expected to finish 2011 at a significantly lower level than its close on Thursday.
The last three months have seen an enormous spike in stock market volatility, to the point that several of the survey’s usual sample of around 350 analysts refused to give forecasts this time.
While analysts are waiting for clear signs either way of progress or failure in fixing the euro zone debt crisis, stalling economic growth in major Western economies will restrain share prices in coming months.
“The global slowdown will still drive economic growth and earnings lower,” said Philippe Gijsels, head of research at BNP Paribas Fortis in Brussels.
“Obstacles to a new bull market are still formidable… there is a lot of political uncertainty. This will take time to clear.”
World equities have already lost around $3.7 trillion dollars in market capitalization since the start of this year — more than the nominal gross domestic product of Germany.
Even by midway through next year, analysts expect only a handful of stock indexes — seven out of 18 — to top their closing 2010 levels. By comparison, world stocks rose around 30 percent in 2009 and around 10 percent last year.
TOP PERFORMERS
There is at least some support for the notion that equity markets should start rising again, other than the perennial bullishness of equity market analysts.
For one thing, global shares look undervalued compared with historical averages. The MSCI World Index is currently trading a little over 10 times 12-month forward earnings, the lowest since December 2008, and considerably below the average of 14.3 over the past decade.
Investors too are entering the fourth quarter with a slightly raised exposure to shares and holding high reserves of cash that could quickly be used to fuel a stock rally, a Reuters poll showed on Thursday.
Russia’s RTS index, long the darling of the poll’s equity bulls, again topped the chart among indexes expected to yield the biggest returns with a 32 percent gain expected between now and mid-2012.
The Shanghai Stock Exchange should rise smartly next year after a torrid two years of heavy losses, the poll showed, while Brazil’s Bovespa is expected to rally about as strongly as Russia.
“Even with the sovereign debt crisis in Europe worsening and discouraging U.S. data, we see the Brazilian economy as plenty resilient,” said Paulo Esteves of Gradual Investimentos.
The survey also suggested strong gains lie ahead on some rich-world bourses, with bourses in the United States, Australia, France, Germany and Japan expected to yield double-digit returns from now until mid-2012.
“The recent sell-off in stock markets around the world, especially in Europe, has been the result of a lack of confidence, not growth,” Markus Huber, head of German sales trading at ETX Capital, said.
Even so, the near-term outlook is very uncertain. The Dow Jones Industrial Average is the only developed-world index that analysts expect to finish the year in the black, with a modest gain of around 2 percent over the course of 2011.
LAGGARDS
Taiwan’s TAIEX is expected to be by far the worst performing market out of the 19 indexes in the Reuters poll.
Having already lost around 20 percent of its value so far this year, analysts see the TAIEX falling a further 5 percent from now until the end of the year and almost 9 percent by mid-2012, as the

tech-heavy index suffers badly from slowing exports to struggling Western economies.
The other most notable laggard was Britain’s FTSE 100, one of the world’s largest by capitalization, which respondents expect will register a full-year loss of around 11 percent.
The poll showed the FTSE gaining marginally between now and the end of the year, and only about 6 percent between now and mid-2012 — considerably less than forecast for its U.S. and European peers.
“I would say that there is potential for upside on the FTSE, but I think the likelihood of any economic growth has been stunted severely by what’s happening in the euro zone,” said Martin Dobson, head of trading at Westhouse Securities.