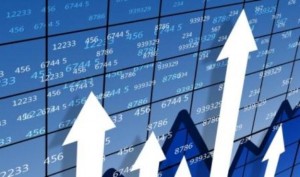 Stocks rose on Thursday, putting the Standard & Poor’s 500-stock index on the cusp of finishing out the year higher as another decline in jobless claims pointed to further improvement in the labor market.

With the benchmark index near break-even year-to-date and the Dow Jones industrial average already higher for 2011, stocks in the United States appeared on track to outperform such major overseas markets as China, Brazil and Europe, all of which are down more than 10 percent year-to-date.

The latest bit of optimism on Wall Street came from a drop in weekly claims for jobless benefits to a three-and-a-half-year low. Also helping equities, consumer sentiment improved in December, hitting its highest level in six months as Americans felt better about the economy’s prospects.

“This is supportive of the fact that the economy is gaining momentum and that the fourth quarter will be much better than people were expecting even just a month ago,” said James McDonald, chief investment strategist at Northern Trust Global Investments in Chicago.

Cyclicals, which have come under pressure recently from uncertainties over global growth, were the day’s top gainers, with financials gaining 2.1 percent, followed by energy up 1.1 percent and materials, up 0.9 percent.

Banks were among the top performers in European and American equity markets. Traders said the European Central Bank’s cheap loans to lenders would help ease their funding strains.

Analysts said the European Central Bank’s first-ever tender of ultra-cheap three-year loans Wednesday was not giving much support to the euro. Doubts remained over how much of the funds will be lent to help the ailing euro zone economy or used to buy sovereign debt of struggling economies as banks deleverage and cut back exposure to government bonds.

“European leaders are not fixing the crisis and they are not doing the things necessary to fix it,” said Paul Dietrich, chief executive and co-chief investment officer at Foxhall Capital Management in Orange, Conn. “They talk, but they’re not backing up the talk with anything like what we did in the United States. And it’s not the sovereigns that is causing this crisis, but the banks themselves.”

Investors warned that a year-end rally would not necessarily translate into elevated expectations for 2012 because many of the issues that hit the market this year, like slow growth and Europe’s debt crisis, remained unresolved.

“Next year will be a tug of war between better economic data here and the prospects for emerging market growth to pick up on one hand, with the European debt crisis on the other side of the rope,” Mr. McDonald said.

The CBOE Volatility index, a gauge of investor fear, fell 1.26 percent and is down about 13 percent so far this week, putting it on track for four weeks of declines.

Lower volume ahead of the Christmas and New Year’s Day holidays has left the market susceptible to heightened volatility this week.

Tibco Software, the business software maker, climbed 8 percent to $23.76 after it forecast first-quarter revenue above estimates and said fourth-quarter profit and revenue soared.

American Greetings slumped 21.1 percent to $13.39 after third-quarter profit dropped nearly 40 percent and it warned of higher expenses in 2012.