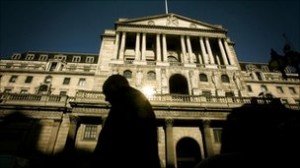 Some of the world’s biggest central banks have announced a programme of co-ordinated action designed to support the global financial system.

The US Federal Reserve, the European Central Bank (ECB), the Bank of England and the central banks of Canada, Japan and Switzerland are all involved.

They will make it cheaper for banks to buy US dollars, which they hope will ultimately help businesses and households access finance more easily.

Action will be taken from 5 December.

As well as cheaper US dollars, the central banks will also provide easier access for banks to other major currencies as and when they need it.

Stock markets jumped sharply on the news, with Germany’s Dax index up 4% on the day and France’s Cac 40 and the UK’s FTSE 100 about 3% higher.

Banks were particular beneficiaries. In the UK, Barclays surged more than 7% and Lloyds climbed more than 6%.

In France, BNP, Societe Generale and Credit Agricole all gained about 6%, while in Germany Deutsche Bank rose by a similar amount.

As the eurozone debt crisis has deepened, banks have found it harder to access finance. They are concerned that some governments they have lent money to may be unable to pay it back.

This means they are becoming increasingly reluctant to lend to one another – a key mechanism through which banks access finance.

Analysts said the central banks’ move would help to relieve some of this strain within the global financial system.

“This shows that central banks across the world continue to co-operate and that the ECB, and its partners, are very aware of the funding stress that European banks are under at the moment,” said Christian Schulz at Berenberg Bank.

“This decreases the cost of funding in US dollars or other currencies so it’s small, but it’s a boost to banks’ profitability and gives them a better chance to shore up their capital ratios.”

Richard Hunter at Hargreaves Lansdown Stockbrokers said the joint action was “designed to prompt an increase in lending, whilst at the same time reducing some of the strains under which credit lines are currently operating”.

If banks take advantage of the cheaper funding, “a great deal of tension will be removed from the system, both in terms of liquidity and market sentiment”, he added.

Earlier on Wednesday, China’s central bank unexpectedly said it would cut the limit on the amount of cash the country’s banks have to hold in reserve in a move designed to boost lending.

The bank had been increasing the rate to reduce lending in order to dampen demand and tackle rising prices.

← What are Occupy Wall Street’s wins and losses?
Stocks Higher on Wall Street →