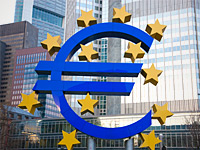 The European Central Bank is indebted to the hilt and is beginning to look like one of the       banks it has done so much to save, according to author Satyajit Das.

Having subsidized the European banking industry with its 1 trillion euro ($1.29 trillion)         long-term refinancing operation (LTRO), funds that were distributed at well below market prices, the central bank is leveraged to levels Bear Stearns and Lehman Brothers might have felt comfortable with in early 2007.

“If the European Financial Stability Fund was a collateralized debt obligation, the ECB increasingly resembles a highly leveraged bank. The ECB balance sheet is now around euro 3 trillion, an increase of about 30 percent just since Mario Draghi took office in November 2012,” said Das in notes sent to CNBC before an interview on “Squawk Box Europe” on Thursday.

“It is supported by it own capital (scheduled to increase to 10 billion euros) and the capital of euro zone central banks (80 billion euros). This equates to a leverage of around 38 times,” he said.

All the money pumped into the system by the ECB  has allowed Europe’s banking to play what Das describes as the “Sarkozy trade.” Get money at 1 percent from the ECB, money lent against assets that may not be worth 100 cents to the euro, and then buy high-yielding periphery debt and ride the carry trade to a healthy profit, according to Das, who said the money has done nothing to address Europe’s fundamental problems.

“It does not reduce the level of debt in problem countries, merely finances them in the short-run. Europe is relying on its austerity program to reduce debt. As Greece demonstrated and Ireland, Portugal, Spain, and Italy are demonstrating, massive fiscal tightening when combined with private sector reduction in debt merely puts the economy into recession,” he said. “It results in an increase, not decrease in public debt.”

To get out of the current situation, Das believes it may be necessary for other euro zone members to “go Greek” and restructure their debt.

“The LTRO does not improve the cost or availability of funding for the relevant countries. Government bond purchases financed by the LTRO artificially decreased the interest rates for countries, such as Spain and Italy. Unless additional rounds of LTRO are offered, interest rates are likely to return to market levels,” said Das, who added that only a third of the LTRO money was actually used to purchase government debt.

“As debt becomes due for repayment through the year, banks may need to sell sovereign bonds purchased with the funds drawn under the LTRO,” he said. “Unless market conditions normalize and banks regain access to normal funding quickly, this will place increasing pressure on sovereign funding and its cost.”

Having bought so much euro zone debt, banks in the periphery are now major holders of their governments’ liabilities and will be sitting on losses, given recent selling of peripheral debt, according to Das.

“As with the sovereigns, the LTRO does not solve the longer term problems of the solvency or funding of the banks, which now remain heavily dependent on the largesse of the central banks,” said Das, who fears deep recession. “It is a government-sponsored Ponzi scheme where weak banks are supporting weak sovereigns, who in turn are standing behind the banks — a process which can be described as two drowning people clinging to each other for mutual support.”

“The problems of the banking system have resurfaced,” he said. “Spanish bank bad and doubtful debts have increased, as the Iberian property bubble deflates.”