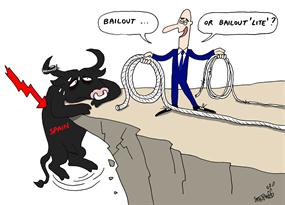 imbed to a record yesterday, raising the specter of sovereign bailouts for the government in Madrid and then Italy that would stretch European Union finances to their limit.

The yield on Spanish 10-year government debt rose for a third day, touching 6.83 percent, the highest since 1997, after Fitch Ratings predicted that Prime Minister Mariano Rajoy will miss budget-deficit targets he’s made the foundation of his economic policy. Italian 10-year yields rose to the highest in almost six months.

The bond rout wiped out the effects of 1.1 trillion euros ($1.4 trillion) in official funding for euro-region banks that has held yields in check since December. Spain’s 10-year yield is close to the 7 percent level that forced Greece, Ireland and Portugal to seek bailouts. Italy, the second-biggest sovereign borrower in the euro area, may need to seek a rescue within months, said James Nixon, chief European economist at Societe Generale SA (GLE) in London.

“The crisis will inevitably roll on to the next domino, and that’s Italy,” Nixon said in a telephone interview. “The southern European economies are effectively in free-fall and market appetite for southern European debt is rapidly drying up. I can’t see anything to turn that dynamic around.”

European policy makers face a series of hurdles in the coming days as bond investors spurn the 100 billion-euro rescue package for Spanish banks that the European Central Bank said yesterday would bolster financial stability. Italy is due to sell as much as 9.5 billion euros of bills and bonds at auctions today and tomorrow while auditors are due to report on the extent of Spanish banking losses from next week.

Greeks will vote June 17 on whether to back Alexis Tsipras, who wants to scrap the austerity plan dictated by the EU and the International Monetary Fund, as a condition of its bailout. New Democracy leader Antonis Samaras, who supports the bailout conditions, said backing Tsipras will see Greece effectively thrown out of the euro.

Mounting tensions were illustrated in the past two days when Austrian Finance Minister Maria Fekter made a prediction she then retracted that Italy would need “help payments.”

“As I consider inappropriate the comments by the minister on the situation of another member state, I abstain from commenting on such remarks,” Italian Prime Minister Mario Monti told journalists yesterday in Rome.

In Berlin, German Chancellor Angela Merkel and her Finnish counterpart, Jyrki Katainen, who both manage AAA rated economies, yesterday told southern European nations to keep implementing the austerity plans that have driven them into recession. They said Europe wasn’t ready for debt sharing through euro bonds.

Introducing euro bonds “is putting the cart before the horse and absolutely leads us down the wrong road,” Merkel said.

European leaders will see the risks of a euro breakup increase unless they can develop a plan for resolving the crisis, Fitch Managing Director Ed Parker said at an event in Oslo yesterday.

“Euro-zone politicians need to take further steps forward to reduce the risks there and we think that further steps will be required in the area of public finances,” Parker said. “We believe Spain will miss its budget deficit targets again this year and next by a substantial margin.”

The European Commission forecasts that Spain will post deficits of 6.4 percent of gross domestic product this year and 6.3 percent in 2013 even after unveiling 45 billion euros of spending cuts and tax increases. Rajoy’s aim is a deficit of 5.3 percent of GDP this year.

Investors are pricing in an increasing risk of a sovereign bailout for Spain as German officials signal the ECB is unlikely to take further measures to support lending after offering about 1 trillion euros of three-year loans since December.

“We have done our part,” Bundesbank board member Andreas Dombret said in a June 11 interview in London. “Now it’s up to the political leaders to deliver on the fiscal and structural policy side.”

Rajoy stuck to his deficit target again when he discussed the bank bailout on June 10, saying that a balanced budget is the first plank of his plan to restart the Spanish economy, which slipped into its second recession in three years in the fourth quarter of 2011. Rajoy’s cuts are so deep, equivalent to about 4 percent of last year’s GDP, they are undermining growth and reducing tax revenue, according to economists at Goldman Sachs Group Inc. (GS) (GS)

“The deficit target is close to impossible at this point,” Pavan Wadhwa, global head of interest-rate strategy at JPMorgan Chase & Co. (JPM) (JPM), said in a telephone interview yesterday. “It’s going to be very hard for Spain to hold on.”

To contact the reporters on this story: Ben Sills in Madrid at bsills@bloomberg.net;

To contact the editor responsible for this story: James Hertling at jhertling@bloomberg.net