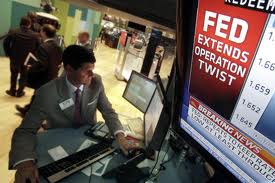 It’s going to take more than low interest rates to fire up investors.

The Federal Reserve’s latest plan to help the economy failed to impress Wall Street on Wednesday. Stocks finished slightly lower for the day, and not much better than they were before the Fed announcement.

The Fed said it would keep its “Operation Twist” program going through the end of the year rather than let it expire at the end of this month. It aims to keep long-term interest rates low by selling the Fed’s short-term U.S. government debt and buying long-term debt.

Economists have pointed out that long-term interest rates are already near record lows, and that consumers and businesses who aren’t borrowing today won’t necessarily borrow tomorrow just because it’s a little cheaper.

The Fed also sharply lowered its outlook for U.S. economic growth. Chairman Ben Bernanke said the economy would grow no more than 2.4 percent this year, down from an April forecast of no more than 2.9 percent.

“What the markets really don’t like was he ratcheted down growth sharply,” said Doug Cote, chief market strategist at ING Investment Management.

Indexes dipped right after the Fed’s announcement came out at 12:30 p.m., then quickly went back to where they were. It was the latest knee-jerk response to news headlines in a stock market that has been buffeted in recent weeks by fears that Europe’s 17-nation currency union could rupture.

“It’s obvious we’re still in a trader’s market, and it’s a market that is still responding to news events, including the Fed, almost hour by hour, if not minute by minute,” said Quincy Krosby, a market strategist with Prudential Financial.

Stocks spent most of the morning lower. Some of the same weakness being addressed by the Fed has forced Procter & Gamble Co. to reign in recent price increases as people cut back on spending. P&G is the world’s largest consumer products company, and sales of its Tide detergent and Duracell batteries, among other things, are a good window into the economy.

P&G predicted continued slow growth in developed markets and slower growth in China, and cut estimates for fourth-quarter revenue and income. The stock dropped $1.83, 2.9 percent, to $60.39, making it the biggest decliner in the Dow Jones industrial average.

Next week, new figures on personal income and consumer sentiment will be released. The reports could signal more retrenchment by the U.S. consumer.

Actuant Corp., which makes industrial products, fell 94 cents, or 3.4 percent to $26.51 after predicting “uneven end market demand, notably in Europe and China.” The company predicted revenue for its current and next fiscal years will be less than analysts had been expecting.

Adobe Systems dropped 90 cents, or 2.7 percent, to $31.99. The software maker, whose products include Adobe Reader and Photoshop, issued a profit forecast late Tuesday that was weaker that analysts were expecting. Its income for the latest quarter fell 2 percent on higher expenses.

La-Z-Boy plunged almost 13 percent after earnings came in far below what analysts were expecting. The stock lost $1.66 to close at $11.47.

Markets in Europe rose and the euro strengthened against the dollar. Benchmark stock indexes rose 0.5 percent in Germany, 0.6 percent in Britain and 2.1 percent in Italy.

Borrowing costs fell in Europe, too. Yields on government bonds in Spain and Italy fell, a signal that investors are less worried about the finances of those two countries.

The yield on the benchmark 10-year Treasury note rose to 1.63 percent from 1.62 percent the day before as investors moved money out of low-risk assets.

Randy Warren, chief investment officer for Warren Financial Service, lamented the focus on the Fed, saying investors should be thinking about where to put their money considering Europe’s problems and a weak euro. He favors American companies who mostly do business in the U.S.

“There’s plenty to choose from for investors,” he said. “They just have to think more than five minutes ahead.”

← How to Invest for Retirement
Was the Spanish bank bailout botched? →