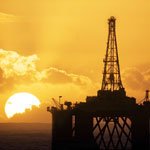 Don’t get us wrong, we still like gold and silver and will probably recommend jumping back into silver shortly. But you can’t pour gold into a farm tractor and use it to grow more food. You can’t pump silver into a 747 and use it to transport cargo. You can’t use gold or silver to make overall production more efficient and generate a higher standard of living. In fact, you can’t do any of these things without crude oil. This is why crude is and will continue to be the world’s most essential commodity.

1) Oil supplies have peaked — oil supply lags discovery by approximately 40 years. New oil discoveries peaked in 1965. Not surprisingly, production has basically flat-lined since 2005. Despite all the press given to new deep water discoveries and North American shale supplies, new production is not keeping up with the depletion of old wells.

2) Producing nations are consuming more of their own output and exporting less. Saudi Arabia, Iran, Norway and Venezuela are exporting far less oil than they did in 2006.

4) Crude oil is decoupling from the dollar. For most of 2011, crude oil was a “risk on”, short dollar play. No longer. Crude is rallying in both strong and weak dollar environments. This is bullish.

5) The odds of a preemptive strike against Iran (the 3rd largest oil producer) are the highest they’ve been in years. 33% of global tanker traffic passes through the Strait of Hormuz which Iran has threatened to close in retaliation for global trade sanctions. Expect it to make good on those threats if bombs start falling on its nuclear facilities.

Therefore, we believe crude has a better chance of doubling from its current $100 per barrel level than gold has doubling from its current levels of $1,575 per ounce. It’s not that we hate gold. We don’t. Some of the same conditions that favor crude will also favor the shiny stuff. But for “bang for the buck,” we feel crude oil is the best opportunity on the board right now.

What is the best way to play it? Energy stocks tend to under perform actual energy products during bullish price spikes. Producer/processor Exxon rose 23.3% and refiner Valero rose 54.5% during crude’s last run-up to $147 per barrel in 2008. Crude oil itself nearly tripled. Why trade crude oil producers, refiners and drillers when we can just trade crude oil itself?

There are many different ways to structure a bullish trade on crude oil. But I recommend the kinds of structures that provide plenty of time for the trade to succeed. Even though I expect crude to make a very strong move to the upside in 2012, I could certainly be wrong about that. So my favorite way to bet on crude oil right now is to utilize a “bull call spread” that does not expire until 2015.

This professional trading strategy may sound complicated, but it is really quite simple. And more importantly, is one of the safest options strategies that professional investors use. The bull call spread I like right now combines two different options. The first gives the investor the right to own 1,000 barrels of crude oil at $125 per barrel. The second option creates obligation to sell 1,000 barrels of crude oil at $150 per barrel.

If the trade does not work out as hoped, the investor’s maximum possible loss would be the initial $3,000 cost of the trade. That’s the kind of risk/reward opportunity I like. Oil is a buy…maybe the very best buy in the entire commodity sector.