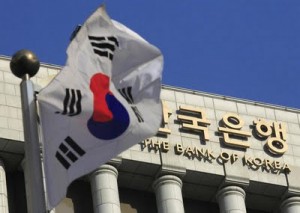 The Bank of Korea has become the latest central bank to step into the money markets in a bid to stabilise its currency.

The Korean won has declined by 10% against the US dollar in the past month, and the bank said it was taking appropriate steps to stem the falls.

The move follows a similar action by the Indonesian central bank on Thursday to shore up the rupiah.

Analysts said big currency fluctuations were a threat to these economies.

“It’s not a desire to produce a stronger currency, it’s just about putting a cap on the decline,” Sean Callow of Westpac Bank told the BBC.

“These countries remember what problems were there, when they had a weak currency,” he added.

The sharp falls in currencies have come at a time when the Asian economies have been trying to control rising consumer prices.

High rates of inflation have become a hot political topic in many of the region’s economies, and a threat to their growth.

Analysts said a dip in the currency values has added to those problems.

“The lower your currency goes, the higher the cost of imports becomes, and that adds to price growth,” Arjuna Mahendran of HSBC Private Bank told the BBC.

Mr Mahendran said the combination of these factors was making the central banks wary.

South Korea’s central bank said that it was forced to act due to huge fluctuations in the currency market.

“Recent forex market movements in one direction were excessive,” the government and the central bank said in a joint statement.

Analysts said the currencies were being hit by a negative sentiment amongst investors.

“Investors are being forced to take a step back due to fear,” he added.

There are concerns that the ongoing debt crisis in Europe coupled with the economic problems in the US may hurt global growth.

The International Monetary Fund and the World Bank have both warned that the global economy is in a dangerous zone.

Analysts said that investors were worried that a slowdown in key markets would hurt growth in the emerging economies and hence they were playing it safe by pulling out.

“It is forced selling, the sort you get in the middle of a global crisis. It’s the scare of a domino effect that is driving it,” said Mr Callow.