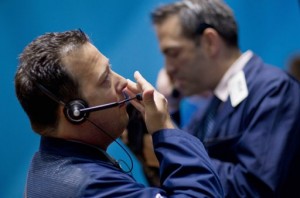 NEW YORK (AP) — The Dow Jones industrial average plunged more than 300 points and erased its gains for the year as investors grew more concerned about economic weakness in the U.S. and Europe.

The Standard & Poor’s 500 index fell more than 3 percent, bringing it 10 percent below its recent high of 1,363 reached on April 29. A decline of 10 percent is considered to be a market correction. The Dow Jones industrial average is now down more than 1,100 points from July 21.

Oil fell 4 percent to $88 a barrel on worries demand will fall because of the slowing economy. Oil had traded over $100 as recently as June 9.

“We are continuing to be bombarded by worries about the global economy,” said Bill Stone, chief investment strategist at PNC Financial.

Large investors have moved so much money into cash accounts at Bank of New York that on Thursday the bank said it would begin charging some clients a 0.13 percent fee to hold their cash.

“In the past month, we have seen a growing level of deposits on our balance sheet from clients seeking a safe-haven in light of the global interest rate and credit environment,” the bank said in a statement to The Associated Press. Bank of New York clients include pension funds and large investment houses.

“Investors are deciding that now is the time to take risk off the table,” said Brian Gendreau, market strategist for Cetera Financial Group. Gendreau said that some investors are now wondering whether stocks will have a prolonged slump similar to the aftermath of the Great Depression.

European stocks fell broadly because of concerns that Italy or Spain may need help from the European Union. The benchmark stock indexes in Italy, Germany and England each fell 3 percent.

Companies that make most of their profits when the global economy expands fell the most. Caterpillar, Alcoa and Chevron led the Dow lower with losses of nearly 4 percent each.

Some traders are selling ahead of Friday’s employment report, which is expected to show that unemployment remained at 9.2 percent last month. A rise in the unemployment number would likely push stocks lower again.

The U.S. government said before the market opened that the number of people who applied for unemployment benefits for the first time was only slightly lower last week to 400,000. That’s still above the 375,000 level that economist say indicates a healthy job market. It was the latest indication of weakness in the U.S. economy.

Kraft Foods was the only company among the 30 stocks in the Dow to rise. Kraft rose 2 percent after the company said Thursday that it plans to split into two. One company will focus on snacks such as Oreo cookies and the other will target the North American grocery business.

All 10 industry groups in the S&P index fell. Energy, financial and industrial companies each lost 2 percent or more.

Stock trading has been volatile this week because of concerns that the U.S. economy is weakening. Manufacturing, consumer spending and hiring by private companies are below levels that are consistent with a healthy economy. Those reports have called into question estimates from economists, including Federal Reserve Chairman Ben Bernanke, that the economy will grow more quickly in the second half of the year.

The sell-off comes at a time when corporate profits are growing. The forward price to earnings ratio of the S&P 500 has fallen to about 12, well below its long-term average of 16. That means that investors who buy now are paying less for each dollar in profits.

Several national retailers are announcing July sales results throughout the day. Target, Gap Inc. and Macy’s each fell by more than 1 percent, in part because of concerns that consumers would spend less if the economy continues to slow down.

The Dow rose 30 points Wednesday — after being down 166 — to break an eight-day losing streak. Nine days would have been the longest since February 1978. The S&P 500 index rose 6 points and broke a seven-day streak.

← Trade the News to Make More Money
Wall Street to brokers: Investors should buy, not flee →