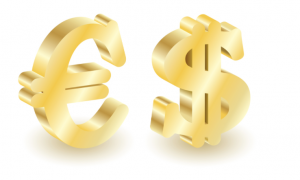 There’s a currency war going on, and the United States is losing. As of Wednesday, the euro had fallen to a 12-year low of $1.05, down from as much as $1.39 just last year. That’s a 24 percent drop in 11 months, to be exact, and there’s no reason to expect it to stop anytime soon.

Now a strong dollar is good for anyone who’s planning a trip overseas, but it’s bad news for anyone who’s planning on selling stuff there. That’s why stocks fell, with markets sliding into negative territory for the year this week, as multinationals that depend on foreign sales took another hit. After all, it’s not just the euro that’s falling against the dollar, but almost every other currency in the world, too — with Turkey and South Africa’s falling more than most on Tuesday.

You could see the dramatic decline in the Euro in this chart: Why is the dollar up so much? Well, the simple story is that the stronger your economy, the stronger your currency. The slightly more complicated version, though, is that currencies go up when monetary policy is relatively tight, and down when it’s relatively loose. Now these should just be different ways of saying the same thing — since central banks raise rates when growth is too strong and cut them when it’s too weak — but that’s not always the case. Sometimes central banks make mistakes, like Europe did, and tighten policy when the economy is still weak, and sometimes they mistake zero interest rates, like Japan did, for easy policy when the economy is so weak it needs even more help than that.

But in any case, it’s a lot simpler now. The U.S. economy is doing well enough that it’s getting ready to raise rates, and the rest of the world is slowing down enough that it’s cutting them. Indeed, the not-so-short list of countries that have eased monetary policy the past few months, some of them multiple times, includes Australia, Canada, Chile, China, Denmark, Egypt, India, Indonesia, Israel, Peru, Poland, Singapore, Sweden, Switzerland, Turkey and, above all, the euro zone. It’s finally started buying bonds with newly printed money, a.k.a. “quantitative easing,” to try to get its economy out of the low inflation, low growth trap that it’s fallen into. And that’s not to mention the fact that Japan, which has been stuck in the same kind of one for the better part of two decades, has also been buying bonds this whole time, and recently started buying even more of them.

So it’s no surprise that the dollar is shooting up so much. Think about it like this. Would you rather buy a U.S. 10-year bond that pays 2.13 percent or a German 10-year bond that only pays 0.235 percent? That’s a pretty easy math question, and investors are answering it by dumping their euros to buy dollars. And that’s not going to start changing until the U.S. and Europe’s monetary policies stop diverging. That’s why Deutsche Bank expects the euro to keep falling to 90 U.S. cents by the end of 2016 and 85 cents by the end of 2017.

So you might want to wait to book that trip, and, more importantly, the Fed might want to wait to raise rates. Even though unemployment is down to a normal-ish 5.5 percent, there’s no rush to normalize policy since there still isn’t any sign of inflation or bubbly behavior. The Fed doesn’t want to be the only central bank raising rates — a strong dollar is like a tariff against our exports and a subsidy for our imports — unless it really has to, and right now it doesn’t.

The only way to lose a currency war is to refuse to fight it, and let yours go up too much. The dollar is already going to go up plenty more no matter what we do, but we can at least try to limit the damage.

Because sometimes a strong dollar is a weakness.